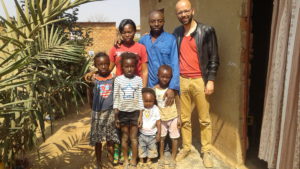 The Dire Straits song ‘Money for nothing’, which came out on the Brothers in Arms album in 1985, offers an ironic working-class commentary on the luxurious and easy lifestyle of successful popstars in the 1980s. Mark Knopfler reportedly wrote the song after overhearing an employee of an appliance store in New York complain about what he saw on one of the TV screens in the back of the store. The man did not consider the performance of music as real work, because popstars get ‘their money for nothing and their chicks for free’, while he had to spend his days ‘moving refrigerators and color TVs’.

I was reminded of this song when, in the early days of my PhD fieldwork in the southeastern part of the Democratic Republic of Congo, I became the target of an unexpected and rather painful criticism. It was April 2005, and I was sitting at the terrace of a bar in Lubumbashi’s Makomeno neighborhood, close to the so-called ‘terril’, an enormous mountain of copper and cobalt tailings dominating the city landscape. Chit-chatting with a group of friends over a few bottles of cold Simba beer and a shared plate of roasted goat meat, I remember feeling euphoric about the fact that I could still take so many directions with my research, and also very pleased with myself for having accomplished so much within only a couple months of fieldwork. In addition to finding a nice host family, I had learned to make myself understood in rudimentary Swahili and had also managed to find an excellent research collaborator, Santa Katweteba, who was prepared to accompany me on my journeys to the rural interior. The euphoria about the smooth course of my fieldwork vanished quickly, however, when I suddenly heard a bar visitor at the table behind me warn Santa’s older brother: ‘Don’t be fooled by the friendliness of this rich white guy, he’s just here to collect cheap information, so that he can make a career for himself back home… now he pretends to be your buddy, but after the end of his project, he will soon forget about you’.

Keith Hart once stated that ‘most anthropologists don’t like money and they don’t have a lot of it. It symbolizes the world they have rejected for something more authentic elsewhere. This lines them up with the have-nots (…)’ (2007: 14). Hart’s boutade was primarily meant to criticize the relative lack of theoretical interest among anthropologists in money and money-related issues. Yet, at the same time, it also hides an uncomfortable truth. There is a strong discrepancy between, on the one hand, the image anthropologists try to convey of themselves towards the people they are working with, and, on the other hand, how they are actually perceived by them. The widespread tendency among anthropological fieldworkers to see and portray themselves as being detached from money is probably in large part due to anthropology’s deeply entrenched disciplinary culture. Ever since the legendary fieldwork of Bronislaw Malinowski on the Trobriand Islands between 1915 and 1918, long-term participant observation has become the hallmark of true anthropological fieldwork. In the early stages of one’s career, doing such fieldwork is considered as a rite of passage into the discipline, during which the aspiring anthropologist is expected demonstrate to her/his academic peers that s/he is both able and willing to experience social and culturel life from the inside, “to blend in”, and to share people’s joys but also their hardships.

In line with this disciplinary culture, I have always tried to maintain a sober lifestyle during fieldwork. To some extent, this has been due to declining levels of research funding, which sometimes forced me to live on a shoestring. However, in all honesty, it has also been the result of a deliberate choice on my part, a perhaps rather naive attempt to express solidarity towards the people I was working with and to gain their acceptance. For their part, my research assistants and participants obviously had their own ideas and expectations about my presence in the field, and the financial resources at my disposal. I am pretty sure that most of them did not suspect me of having the same financial capacity of other, wealthier expats, but, at the same time, they clearly realized that Western fieldworkers like myself were not exactly the poorest of the poor either.

In the early 1970s, Harold Schneider cynically remarked that anthropological fieldwork is a form of ‘transactional arbitrage’, whereby one social exchange system is played off against another: ‘(….) the anthropologist goes into a foreign system, where he has high status because he comes from a dominant society; the information he gains through his privileged contacts is then published in his own system, increasing his status there’ (Schneider 1974: 264). It is, of course, exactly this type of calculative and extractive behavior that the critical bar visitor in the abovementioned incident sought to denounce. As much as I liked to think of myself – and present myself – as a well-intentioned stranger, only interested in exploring unfamiliar life-worlds and meeting new people, I could not avoid being perceived as someone with a hidden agenda, advancing my own professional career at the expense of the Congolese who had been so kind to welcome me in their midst.

While, since the publication of Sanjek’s essay on anthropology’s “hidden colonialism” in 1993, a lot has already been done to give greater scholarly recognition to the crucial contributions of research collaborators and participants (see e.g. Schumaker 2001 and Bank & Bank 2013), the debate about the roles and meanings of money in fieldwork collaborations is still in its infancy. One of the great things about the workshop in Ghent was that it offered us a unique opportunity to compare our respective experiences with money in the field, and to take a first step towards a more open dialogue on money-related matters. If I have learned anything from the incident in this blog and from the one described by Stéphane Lumbu Maliba, it is that we can no longer allow ourselves to treat monetary compensation as the elephant in the room of fieldwork collaborations.

Jeroen Cuvelier works as a postdoctoral research fellow at the Conflict Research Group (CRG) of Ghent University, and as a visiting professor at the Institute for Anthropological Research in Africa (IARA) of Leuven University. His current research deals with the dynamics of belonging among the victims of mining-induced displacement and resettlement in the Congolese Lualaba province.

The Bukavu Series online exhibition explores the power dynamics between researchers from the Global North and the Global South. The Series is a visual extension of the Silent Voices Blog: Bukavu Series.

In a refugee camp, carrying out research is most important. As refugee residents, we feel there is much to be improved about the conditions in which we have to live, and research is one of the avenues through which we can indirectly raise our voice to attempt to change things.