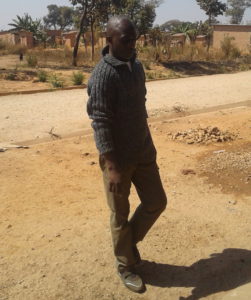 The requirements and rigor of empirical research often force Western researchers to work in environments of which they do not completely understand the cultural, geographical and sometimes linguistic complexity. Hence the idea of being accompanied by another local researcher or by a guide who knows the habits and customs of the environment in which the research takes place.

In January 2012, Jeroen Cuvelier came to Katanga to do short-term fieldwork in Kasumbalesa, a town situated at more or less 90 kilometers from Lubumbashi, on the border between the Democratic Republic of Congo and Zambia. The study focused on the single window system, a tax management method approved by the DRC government as it is already the case in several other African countries, including Zambia. The importance of the research theme and the challenges associated with doing fieldwork in a complex environment such as Kasumbalesa made it necessary for Jeroen to be accompanied by a collaborator for a good data collection. This led him to contact Olivier Kahola Tabu, a professor of social sciences and a former researcher at the Observatory of Urban Change at the University of Lubumbashi. For several reasons, Olivier decided to put Jeroen in touch with me. Not only did I spend several years working for the Observatory myself, carrying out empirical surveys about a wide variety of socio-economic, health, demographic and other issues, but I also held a degree in sociology from the Faculty of Social Sciences of the University of Lubumbashi, obtained in 2005.

During our first meeting at the office of the Observatory, Jeroen and I started off at the wrong foot. After a talk of about 30 minutes, we had failed to find an agreement about the daily fee I would receive for my contribution to the research. I rejected Jeroen’s initial proposal to work for 30US$ per day and was considering to withdraw from the project, when he eventually made me a final offer, raising the daily fee by an additional 10US$. Having found an agreement about the finances, we immediately set to work, fixing the work agenda and listing the people we wanted to meet for interviews. As I will explain below, our difficulties in reaching an agreement about the financial aspects of the fieldwork were in large part due to our failure to make explicit our respective norms and ideas about fair compensation for different types of research services.

Research in a precarious society

Congolese universities, in most cases, do not have the necessary budgets to be able to meet the overall needs of research, a difficult situation that does not offer a chance for Congolese researchers to occupy themselves with data collection, analysis and writing in a proper and dignified manner. Those who are trying to immerse themselves in research in the DRC therefore accept to run all possible risks, sometimes even using their own means to achieve more or less acceptable results.

Nevertheless, although life remains precarious for Congolese researchers and often prevents them from producing high quality scientific knowledge, several basic researches are sponsored and carried out either by international organizations or by Western universities in collaboration with local researchers, commonly called enquêteurs (investigators).

In these types of studies, it is often a question of setting up research teams who have previously followed a training on research techniques and fieldwork ethics. Once at the end of the training, each team formed includes a number of enquêteurs led either by a chef d’équipe (team leader) or by a superviseur (supervisor). The latter keeps track of activities during the course of the study and even afterwards in order to correct errors made by the enquêteurs.  It should be noted here that in many cases, supervisors and team leaders are often local, especially when it is a research that covers a large area and requires the presence of a large number of investigators and supervisors. However, it is not excluded to see Western researchers doing the supervision of field teams. This often happens in cases where there is a small team of three or four people. In this case, the Western researcher carries out fieldwork at the same time as the locals and directs all operations as a supervisor. Apart from two categories noted above, there is a third category called “consultants”, which is composed of researchers already trained and with proven field experience. In many cases, they are used as experts and they often have a different treatment than that of a supervisor or team leader and that of an investigator.

This differentiation between enquêteurs, superviseurs and consultants results in a variation in monetary compensation. At our first meeting with Jeroen, I put myself in the position of a consultant, which is why I rejected the his I initial proposal of $ 30 a day. According to current experiences with some organizations, the daily salary for enquêteurs currently varies between $ 25 to $ 30 US but for the most generous, the salary is even up to $ 50 a day. For superviseurs, this varies between $ 35 to $ 50, especially when the study is sponsored by multinational corporations or international NGOs. All contracts performed as an expert are paid at $ 100 a day. Of course, in addition to these daily fees, supervisors, investigators and consultants are entitled to a per diem covering the needs of housing, catering, communication and transport.

In many cases, the question of compensation is and remains very controversial, especially when it concerns a study organized by a Congolese institution because there is no officially established or recognized tariff at the national level. Everything is therefore a function of agreement found between the sponsor of the study and his research team who must necessarily agree on important aspects such as the geographical space covered by the research, the distances to be covered to reach the area of study and the time spent on the ground. It is in fact these aspects which give a clear idea of the amount to be fixed as a daily salary. As for Western organizations and universities, the rules of the games relating to remuneration are fixed in advance; and they give consideration and respect to the work requested by the sponsor.

My own reluctance to talk openly about the hierarchical differences within the research industry of Lubumbashi and their implications for financial compensation, and Jeroen’s hesitation to be fully transparent about the available fieldwork budget help to explain why we almost failed to embark on a fruitful fieldwork collaboration

Holding a degree in sociology from the University of Lubumbashi (UNILU), Stéphane Lumbu Maliba gained his first research experiences at the UNILU-based Observatoire du Changement Urbain in 2004. Since then, he has built up extensive research and fieldwork experience in different parts of the Democratic Republic of Congo, but especially in the Katanga region. He joined the Silent Voices network through his research collaboration with Jeroen Cuvelier, which started in 2012.